Documenting The Level over time.

Taking the photographs became part of an almost daily routine, and doing it I became acutely aware of the changing seasons, aware of all the activities taking place and how has access to local green space felt so vital. A graph / scarf documenting the rollout of the Covid-19 vaccine in the UK.

I cast on 100 stitches to express the whole population, with an additional 3 for the bottom axis. It’s knitted in moss stitch. Red column indicates 3rd national lockdown in England in first week of Jan 2021. Green columns show key points in route out of lockdown (ie schools re-opening). 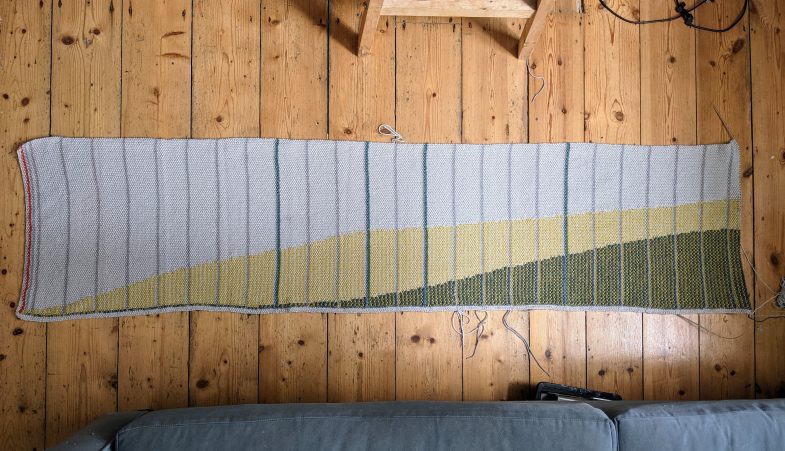 Stitches are a round number, so the percentages have been rounded, i.e 0.3 becomes 0, 0.8 becomes 1. With thanks to Abbas Panjwani at Full Fact for stats help. Spreadsheet / pattern on Ravelry.

I’m finding a it a meditative process and good to focus on something positive during the pandemic, baby steps as they are. 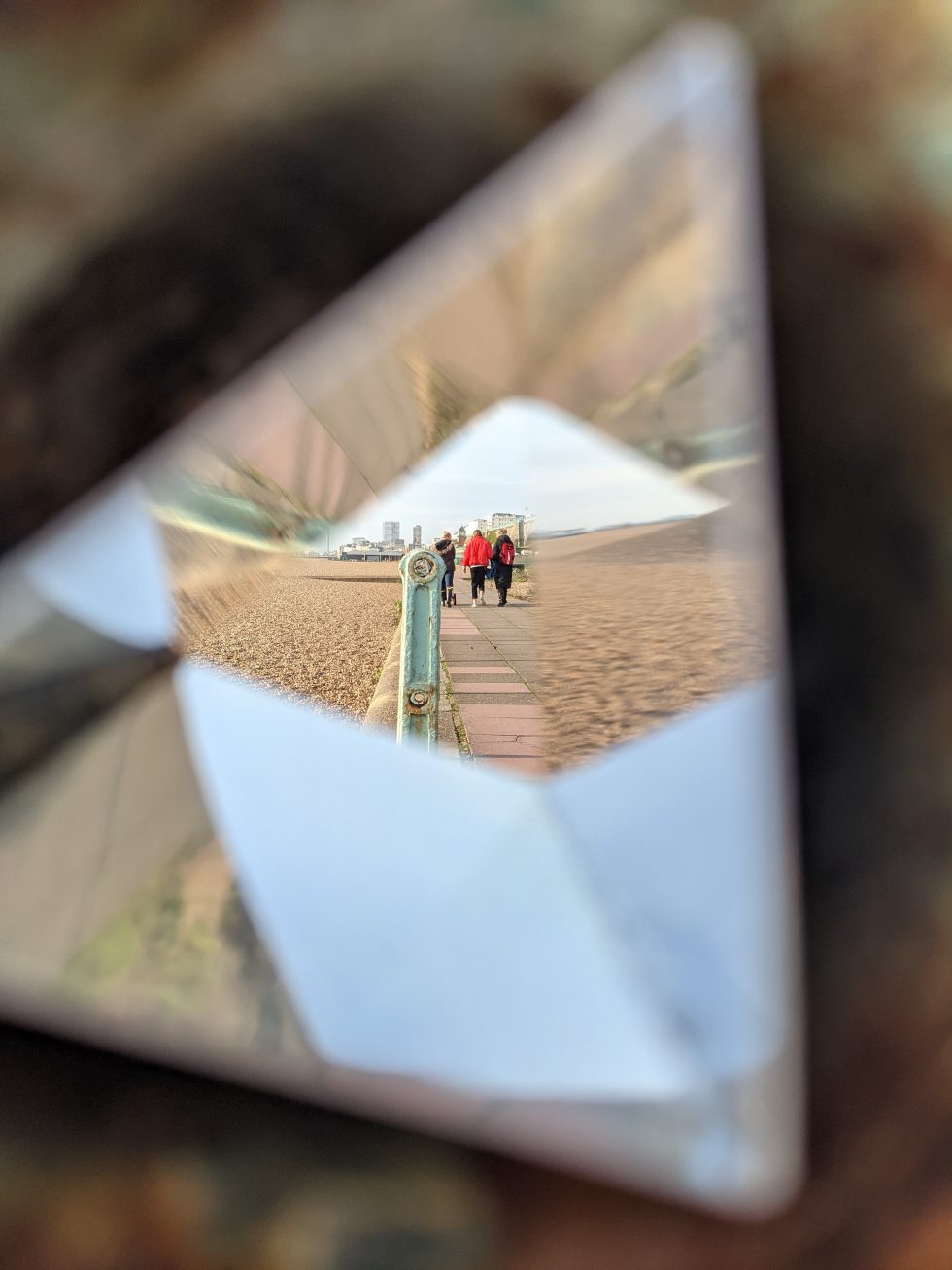 A temporary site-specific installation of a series of small mirrored objects. Inserted into the holes left by missing railings along the beachfront at Black Rock, Brighton, they offer curious passersby a series of mini-views.

A nod to the proximity to the nudist beach, and referencing the slot telescopes on the promenade, end of the pier entertainments and halls of mirrors, these mini-views offer playful distortions of the beach / skyline (without actually invading anyone’s privacy!) Part of a Brighton Artists Network project, Brighton, 2021. With thanks to Adam B @rodhuscreativestudios for fabrication help, and Anna Carlson and Mat Walker for drone footage. Hand printed cape shown at We Built This City as part of Full English exhibition, London, 2018

July 2020: The cape is now in practical use by the Brixton Tatterjacks and they recorded a film of Johnny B singing about eating (albeit much more healthy options that those featured on the tatters!) 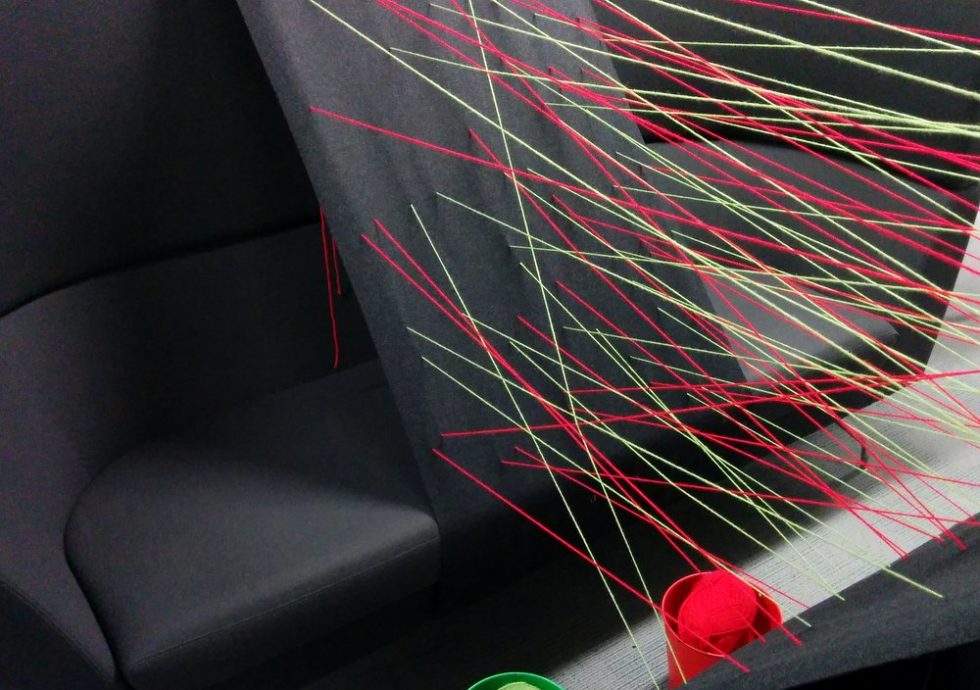 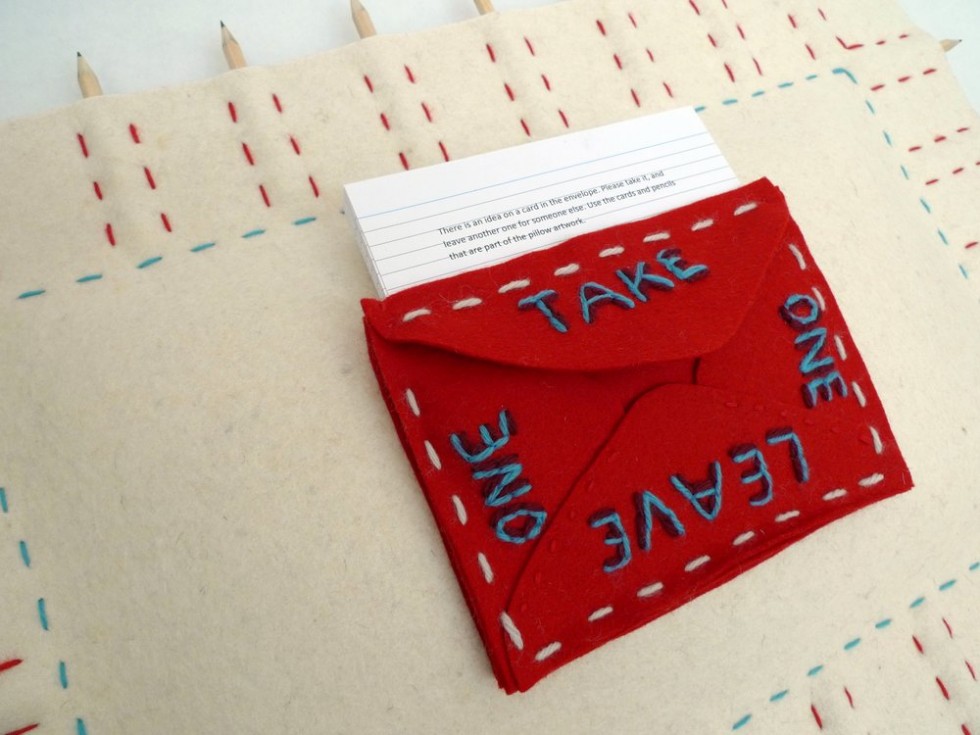 Dimensions 40 x 60cm
Felt, wool, pencils and blank cards with a prompt for visitors to leave an idea in exchange for one taken (see example of this in action below!)

Blog posts about Take one, leave one 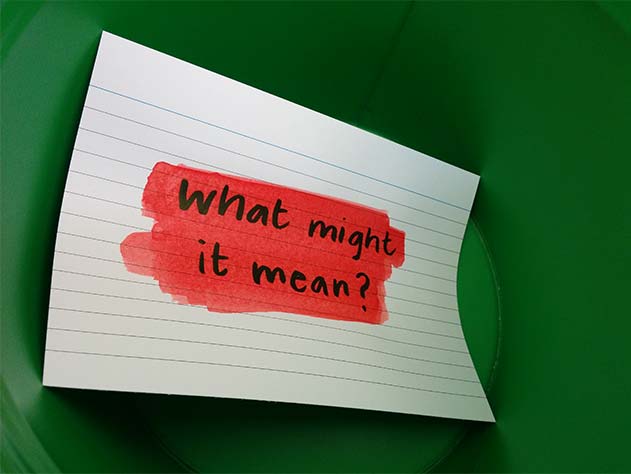 Emerald Mosley (visual artist) and Maddy Costa (writer) invite you to collaborate with us on an alternative string theory, making (non)sense of art and life. Use a length of string to match a question with an answer. Choose what makes sense to you at this moment in time. Match as many or as few as you like. Remember there might not be an answer. And how long is a piece of string? That depends on you…”

Blog posts about this project 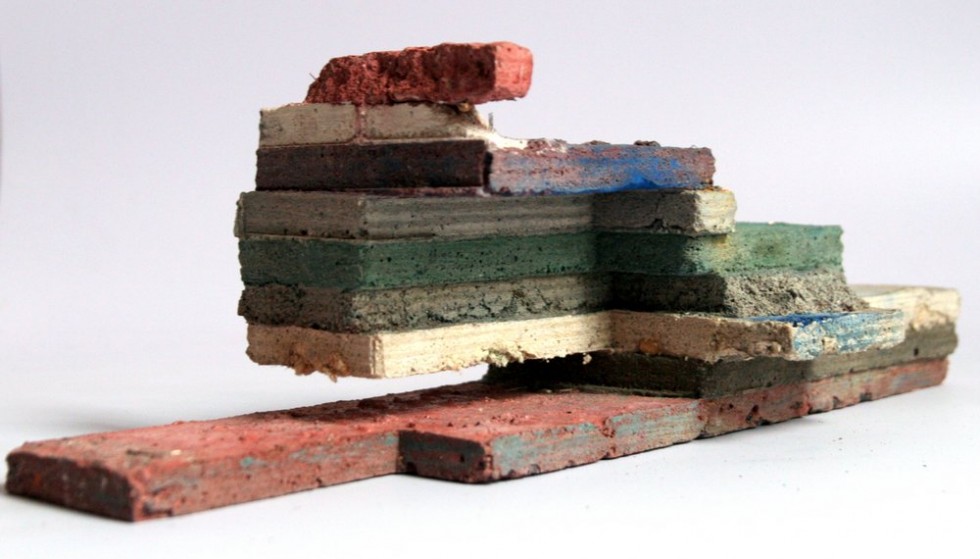 Displayed as part of group exhibition Beton Machine at the MARSO gallery (Mexico City, 2014) and will be shown in 2016 at Pioneer Works (Brooklyn)

Film by Alex Ezpeleta and photos by AA documenting 2014 workshop Blog posts about the making of Dark Traces Blog posts about the making of Modern Fossil Christina Ballard and Emerald Mosley are thrilled to have won the summer sculpture competition organised by D&D London, Belu and WaterAid. It is on show throughout September on the roof terrace of the Coq ‘Argent restaurant in London.

If one should fall

“The site-specific installation in glass and ribbon on the roof terrace of the Coq D’Argent restaurant in London, re-appropriates one thousand used Belu bottles and incorporates over five kilometres of cascading and interwoven ribbon.

With their sculptural installation the artists aim to prompt consideration of our limited access to safe water, which we rely upon to live. Water covers the majority of the earth’s surface, yet almost all of it is saline. Only 2.5% of water on earth is fresh, not salty. Astonishingly, less than 1% of that fresh water is accessible and safe to drink.

Colour is used in the installation in a visually striking way to reference the locations and states of fresh water. Six hundred and ninety-nine bottles represent the almost 70% of fresh water that is frozen (found in ice caps, glaciers and as permanent snow); three hundred bottles refer to fresh water which is not accessible for human use (found in soil moisture, or lying in deep underground aquifers as groundwater); and just one bottle refers to the proportion of fresh water on earth that is accessible and safe for human use.”

Blog posts about the process of World Water Week installation